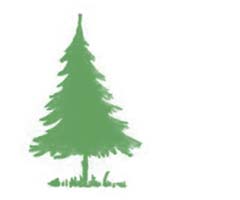 A programme is produced to accompany the annual gathering which usually takes place in April.

This magazine contains articles relating to the location of the gathering. It is also posted to members who do not attend the gathering as a fourth magazine. Here is a sample article:

The Spell of a Sea Witch

A Look at Malcolm Saville's Suffolk by Patrick Tubby

Little did I think when I wrote my article for the Souvenir Programme for last year's Ludlow Gathering, that twelve months on we would be in Southwold. Obviously Malcolm Saville is best remembered for his books set in Shropshire and Sussex, but as we all know, he set stories in other locations as well; London, Yorkshire and Devon, to name but a few.

Saville also set four books in East Anglia; Redshank's Warning and The Luck of Sallowby - Jillies stories set in Blakeney and Ely respectively, the story of the film Treasure at the Mill set in Essex, and of course the Lone Pine book Sea Witch Comes Home set here, around Southwold and Walberswick.

Members may recall that as a postscript to my article last year, I had hoped to arrange a themed walk around this part of Suffolk - however, as the summer drew on it became apparent that this year we would be coming to Southwold for our Annual Gathering; so the planned walk was postponed on the premise that this weekend we could all explore the Sea Witch Comes Home locations.

Unlike Sussex and Shropshire, for many of you this is probably your first visit to East Suffolk. George Jasieniecki, this year's programme editor, has therefore asked me to re-submit my article from last year, making several necessary revisions and additions, so I hope you will want to read it again.

In this article I shall examine Malcolm Saville's use of a real location as the setting for Sea Witch Comes Home. I will look at each of the four Suffolk localities in turn, trying to establish what really exists, what places form the basis for those in the story, and those that are 'writer's licence'.

Of course, the floods which are used as the climax to the story, are based on the 1953 floods that caused so much devastation all along the East Coast. Those floods are featured in more detail elsewhere in this programme, and are also the subject of an illustrated talk included in the weekend's activities.

Looking at the Sea Witch map, the first thing that should become apparent to anyone who knows this area of Suffolk, is that just about everything really exists - the only exception being the houses of Heron's Lodge, Yoxleys and the Millers' cottage. 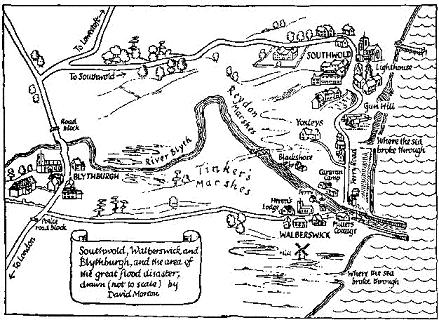 Today the village is little changed from when Sea Witch Comes Home was written in 1960; a few new homes have been built, but these are much in keeping with the designs of the older houses. There really is only one road into the village, with just a few lanes running off it and into the surrounding marshes.

Heron's Lodge, the home of Richard, Paul and Rose Channing, is described as '...an odd looking house with a wooden veranda along the front of it.'

Supposedly the third house on the left as you entered the village from Blythburgh, it would have been quite large, for it is said to have five bedrooms. Alas, on several visits to Walberswick, I have been unable to find a house that could have been the basis for Heron's Lodge.

Moving through the village, in the book, the road passed the 'Royal Oak', turned sharply to the left before crossing the green with its shops, and on to the river. This description is very accurate, the only deviation from the real Walberswick is that there is no 'Royal Oak', instead, just before the road turns to cross the green, is the long established 'Anchor Hotel', now one of several local hostelries operated by the Southwold based Adnams Brewery.

The Cottage where William and Mary Miller live, is said to be built of Suffolk flint, with a red-tiled roof, surrounded by a whitewashed wall, and only fifty yards from the river bank. As with Heron's Lodge, there is no cottage that fits this description close to the River Blyth, although many in the village are built of flint and red-tiled. Just before the road ends, on the right hand side is a row of terraced houses, and the Millers' cottage was likely be sited here.

But, perhaps the most accurate description in the whole book is the route to the red mill. Rose visits the mill in the third chapter; she walks to the end the street, past the Millers' cottage and up on to the shingle bank heading south. After about ten minutes, she drops off the bank, over a footbridge, and by causeway raised a few feet above the surrounding marsh, heads for the red mill. I have walked to the mill myself, and I believe that at some point during the preparation of Sea Witch Comes Home, Saville must have done so too, for there actually is a raised causeway, which does lead towards the old mill although it now appears to be missing a footbridge. Thus, I had to take a slightly different route, alongside one of the many dykes. When Paul goes to the mill later in the book, he again uses the causeway and when he suspects that he is being followed, he drops below the level of the path, and crawls through the rushes. In both instances, Rose and Paul return to the village by the longer inland route, but this is not described in the story.

A local appeal to renovate and preserve the mill was launched in 1951, and the following year the tower was repaired and fitted with a new cap. These repairs almost certainly saved the mill from destruction during the 1953 floods. Saville most probably visited the mill between the floods and 1960 (when it was gutted by fire), for he describes the mill as being without sails, but with its cap (dome shaped roof).

During the summer months, the ferry service is still operated across the River Blyth to Southwold Quay. The aged ferryman, though not Old Adam, still rows his long skiff single-handed across the strong currents of the river - not even a hint of an outboard motor.

If we now cross the river to Southwold, we can again identify many locations. Almost immediately upon alighting the ferry, is the caravan camp and cafe behind which Paul and David hide whilst waiting for the inquisitive Molly to cross the river in chapter eight. As she makes her way along Ferry Road, they follow, keeping below the crest of the shingle bank - after also considering the path, that does indeed run parallel to the road. When the boys reach the town, about three-quarters of a mile from the harbour, they first head to Gun Hill, a wide green above the promenade. Here remain the six cannon which were provided to defend the town two hundred years ago. Overlooking the green is the coastguard station mentioned several times in the book.

For anyone entering Southwold, the skyline is dominated by the towers of the church and lighthouse. In fact, the only place to the north of the river mentioned in the story that does not exist, is the grey-walled farmhouse, Yoxleys, where Simon Donald imprisoned Richard Channing. Yoxleys was supposedly situated a few hundred yards to the west of Ferry Road, down a long, unmaintained drive. Between the town and harbour there are no houses set back from the road; and it is unlikely that any house built on the marsh would have had a cellar for, if ground level were only a metre above sea level, keeping the water out would be a constant problem.

When Richard Channing is escaping from Yoxleys, the footbridge above Blackshore is mentioned. The footbridge, which survives, is built on the site of the swing bridge of the Halesworth-Blythburgh-Southwold branch railway, a narrow gauge line that was discontinued in 1929. At Blackshore are the majority of the black-tarred fishermens huts, and boatbuilding sheds, as well as the headquarters of the Southwold Sailing Club. Here also is the Harbour Inn, which although not mentioned in the book, does have a significant feature: displayed on the front is a plaque marked 'Flood level 1953' that is at least six feet above the path.

It was here, four miles west of Walberswick, that the main flood evacuation centre was established. The Women's Voluntary Service set up a kitchen in two large barns close to the church, supplying hot food to those in need. There are no significantly sized barns in this part of the village, though half a mile to the south is a picnic area known as Toby's Walks, and until recently a large barn known as Toby's Barn stood close by; could this have been the basis for the barn used as the evacuation centre?

The Vicarage, which doubled as the first aid post during the disaster, is sited close to the magnificent fifteenth century Blythburgh Church. It was inside the church that Mary recovered the stolen John Jackson painting, hidden by Simon Donald prior to his detention by the police. During the Civil War, Cromwell's soldiers did indeed use the church for stabling their horses; they used the winged angels of the ceiling for target practice, and screwed tethering rings into the stone pillars - as well as causing the damage to the floor around the font which is mentioned in the story.

To the north of the village is Blythburgh Bridge, carrying the main Great Yarmouth-London trunk road over the River Blyth. From the bridge there are wonderful views of the Blyth and its flood plain, with Southwold in the distance.

Seventeen miles south of Southwold is the harbour at Orford where Sea Witch was berthed. The anchorage is sheltered behind the shingle mass of Orford Ness, and although only a mile from the North Sea, is actually over five miles from the mouth of the Rover Ore.

Just up the road from the quay is 'The Jolly Sailor', the inn on which the 'Harbour Lights' is surely based - complete with the side entrance leading to the rear yard (now the car park). In the sixteenth century the quay ran alongside Quay Street, hence its name, and was overlooked by the jolly Sailor'. On the fireplace in one of the bars is a brass strip marking the level of water in the 1953 flood. The water flowed across the marshes behind the inn, flooding the building to a depth of two feet.

At the other end of Quay Street is Orford village, exactly as described in chapter four:

'He stopped in the central parking place in the broad street. . ., "You've got to turn round and take the turning to the right", Rose explained.'

Entering the village from Snape, as James Wilson did, you turn right into the Market Place, with its parking spaces in the centre. At the end of the street is the mighty keep of the twelfth century castle. To get to the quay you have to turn round, leave the street and, by the church, turn right, as Rose had explained to James.

Walberswick, Blythburgh and Orford are all very picturesque villages, and Malcolm Saville Society members will be able to explore each on the coach tour this weekend; likewise, Southwold is a beautiful town, and members should take time to explore its lovely streets and seven greens. Saville must have spent quite a lot of time in this part of Suffolk in the 1950s, and it obviously left such an impression on him, that he was inspired to write Sea Witch Comes Home. I hope that when you leave Southwold, you take fond memories too.